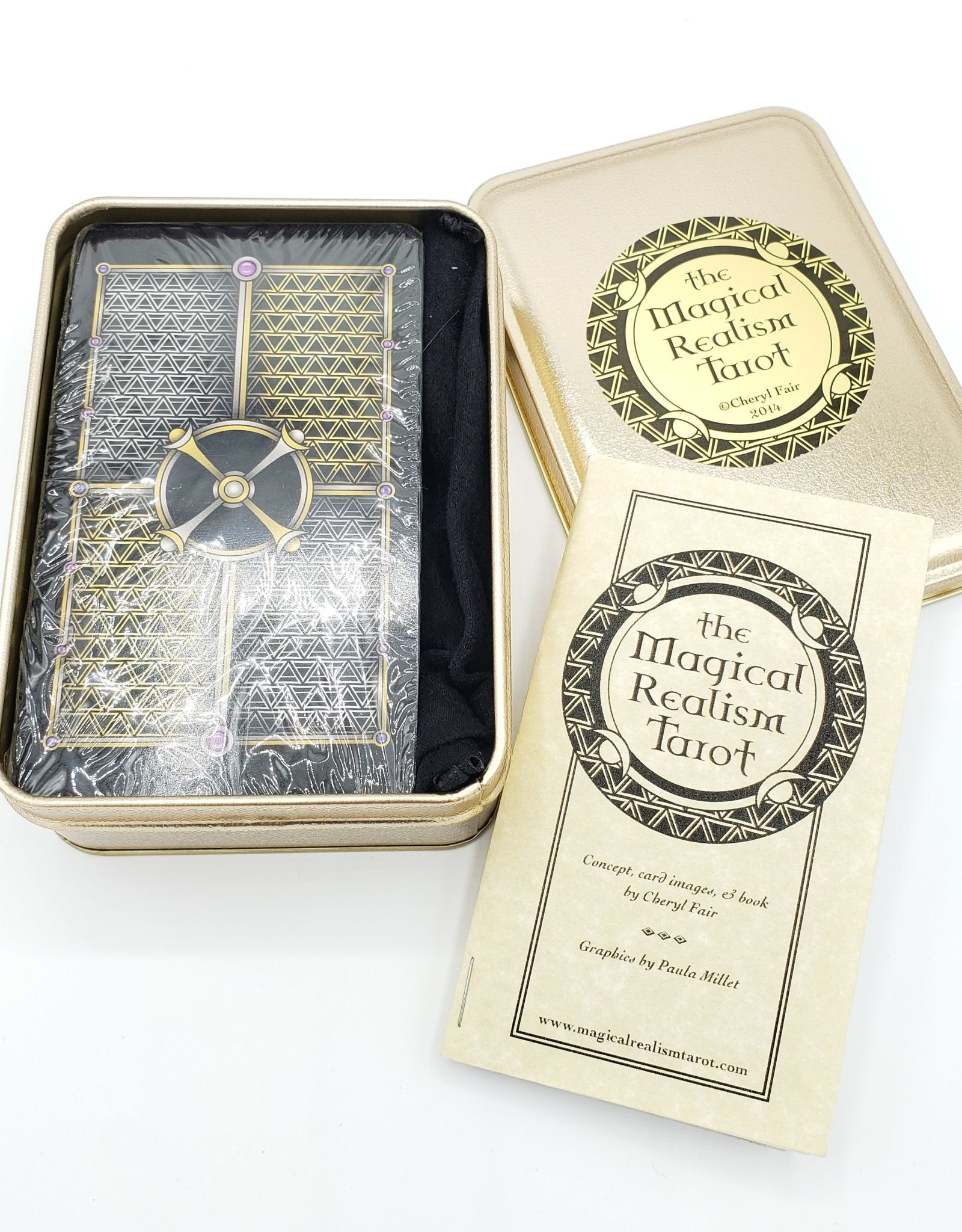 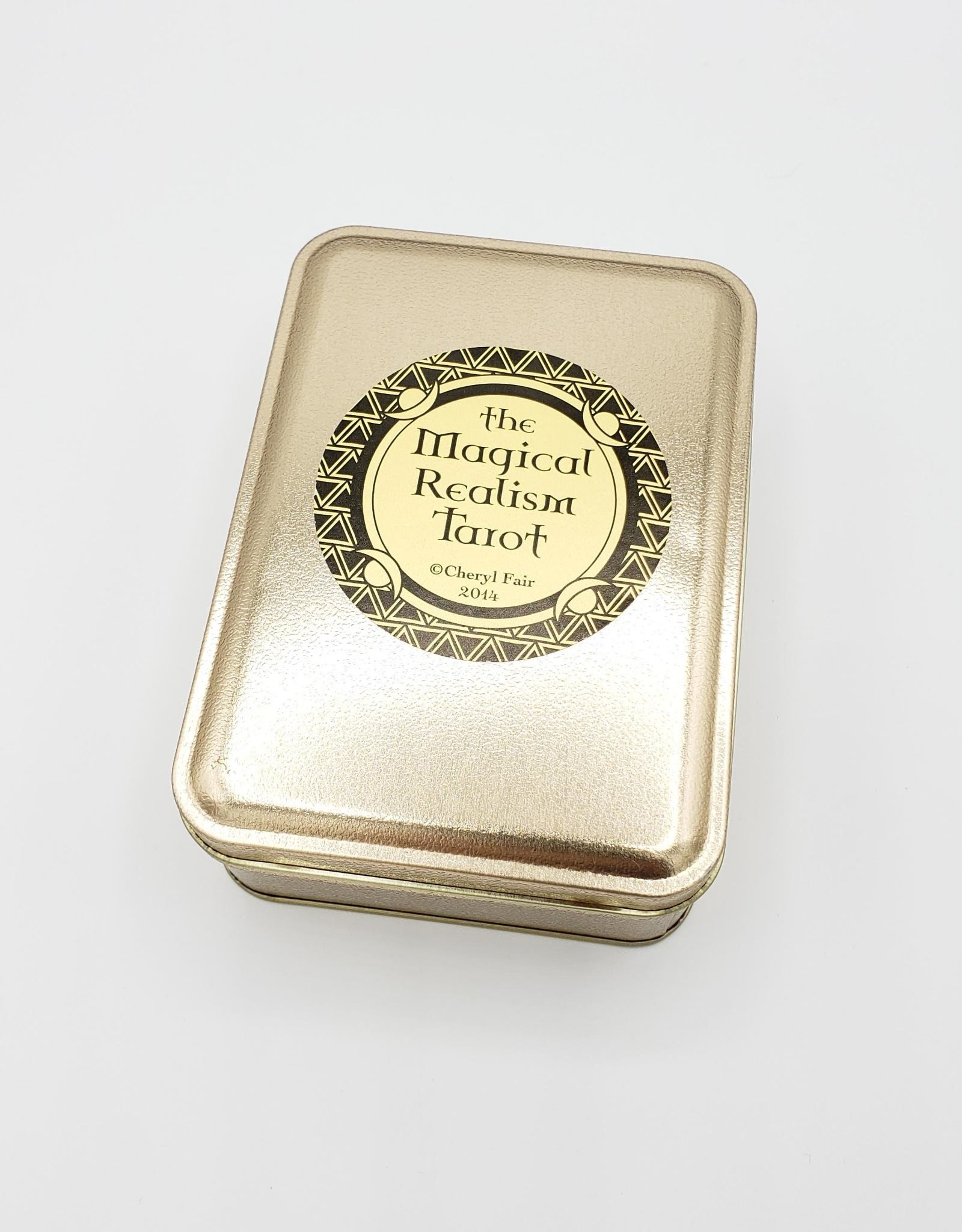 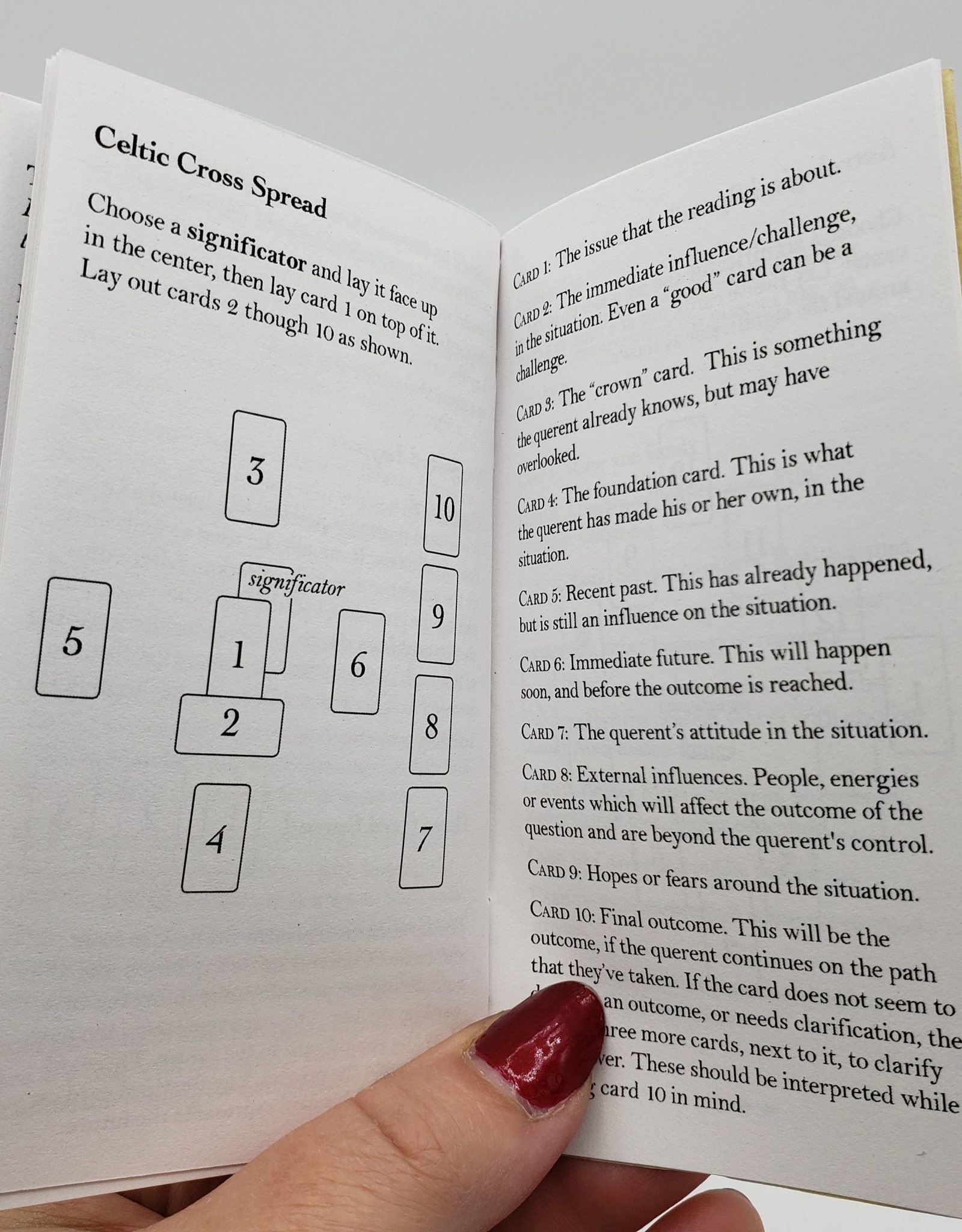 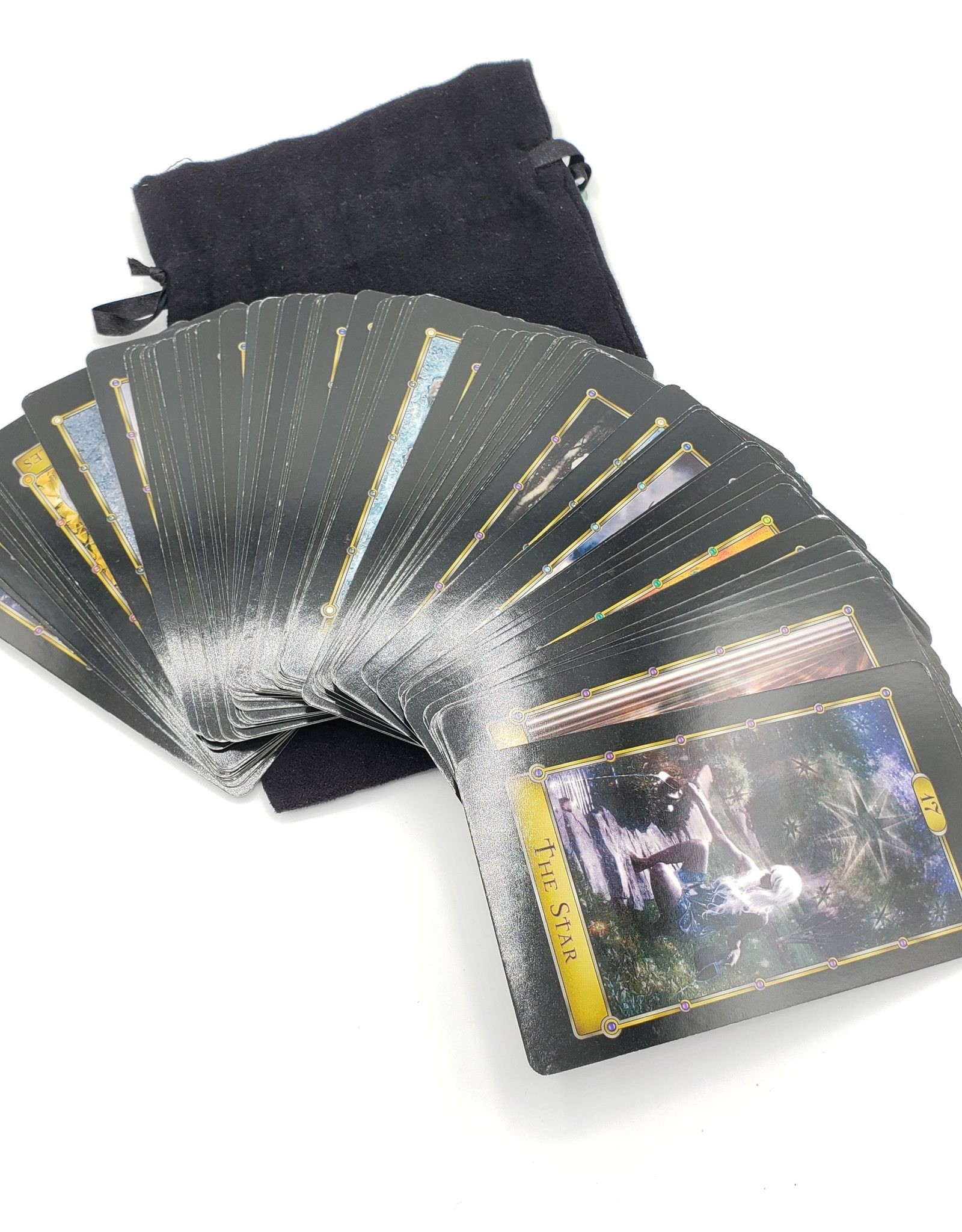 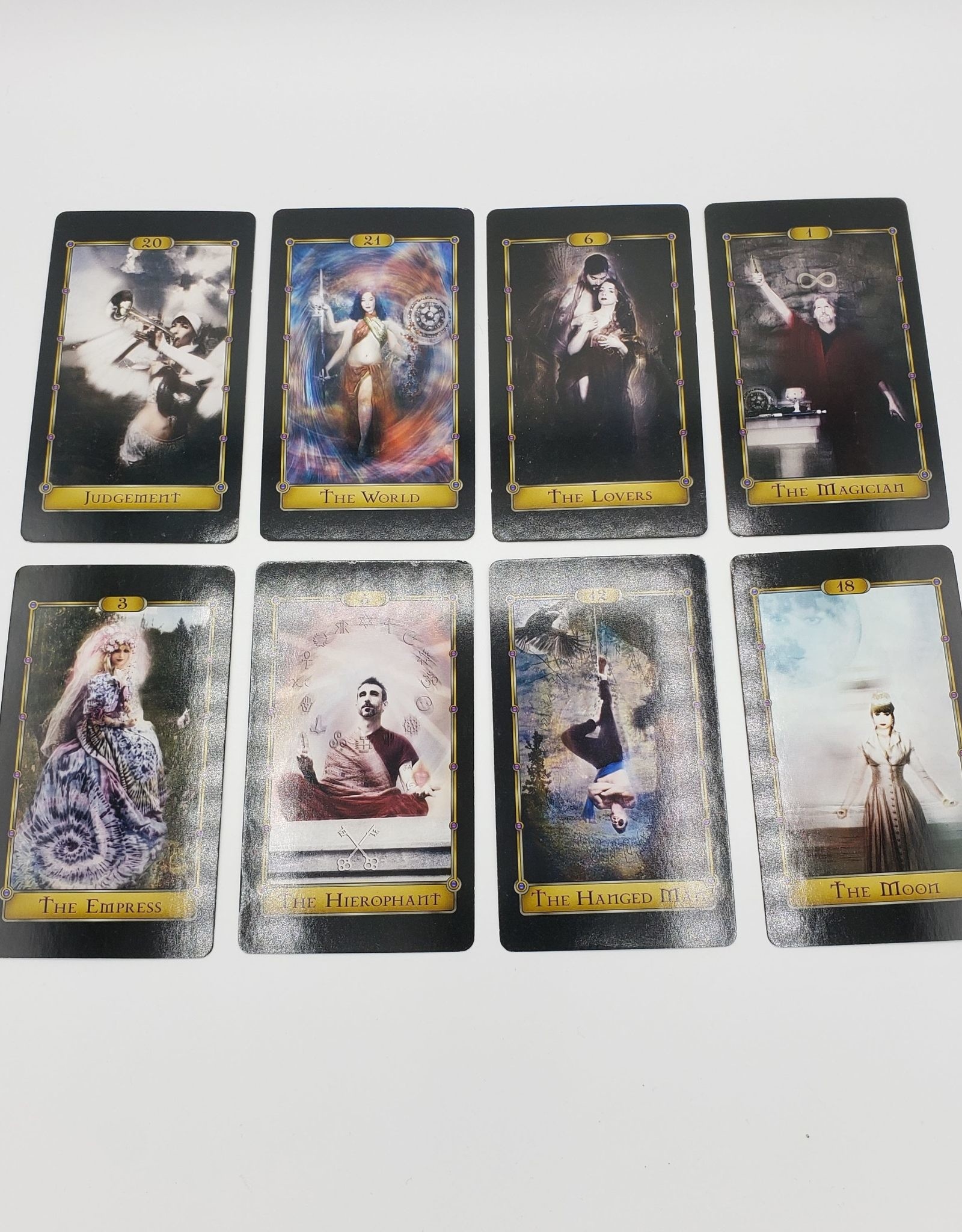 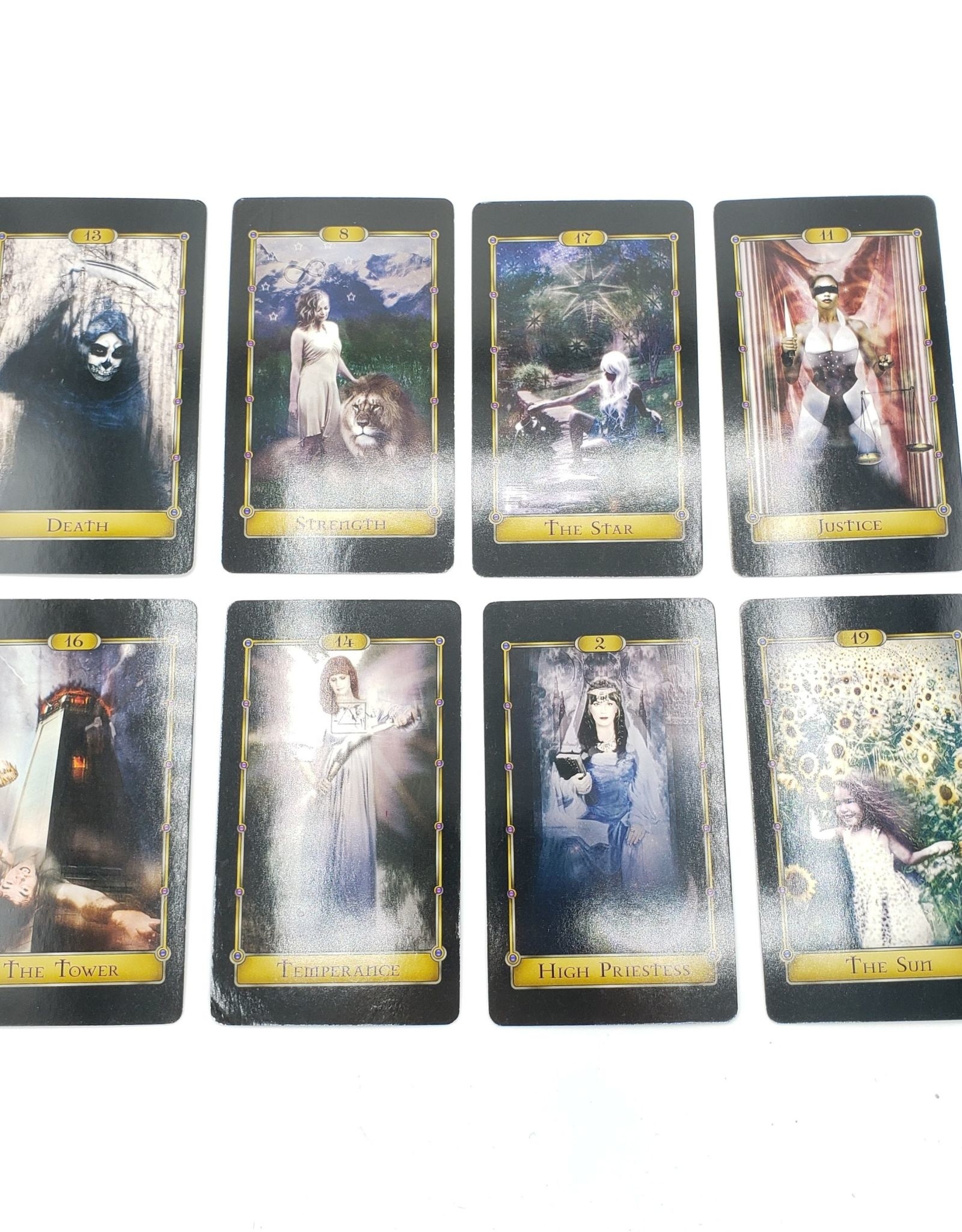 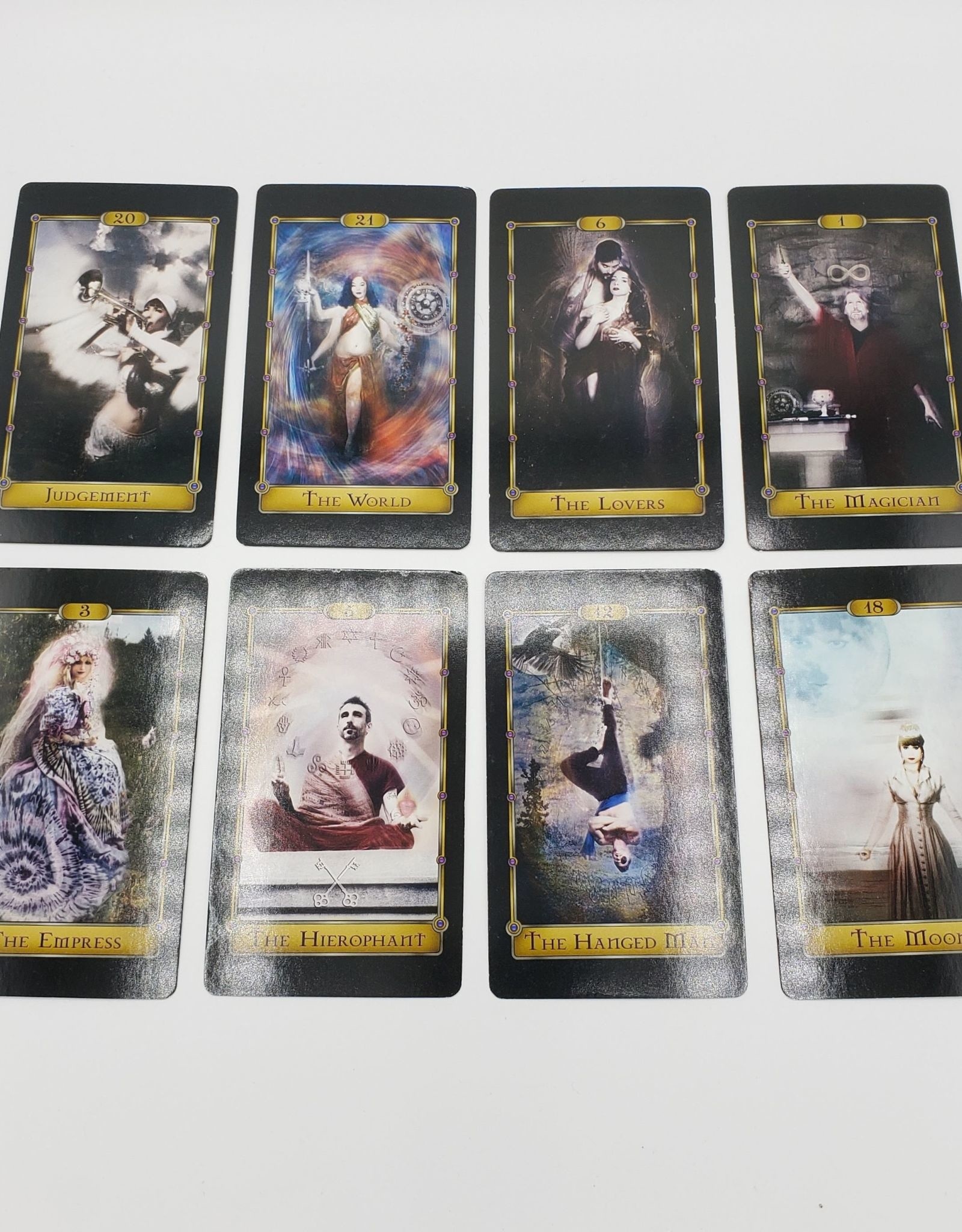 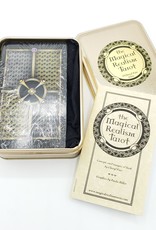 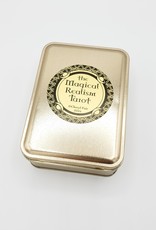 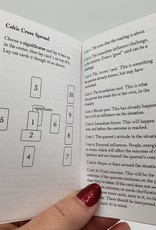 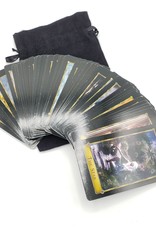 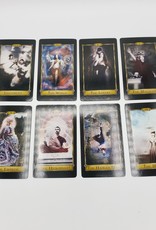 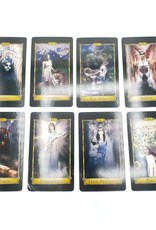 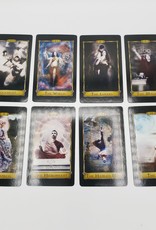 The Magical Realism Tarot is a 78 card tarot deck, a 34 page booklet with meanings and instructions and a drawstring suedecloth bag, and comes in a Rosegold-tone metal box.

Magical Realism is a genre of art or literature that incorporates fantastic or mythical elements into an otherwise realistic setting. The style of the scenic illustrations on the cards is the inspiration for the name of the deck. The interpretation of each card in the Magical Realism Tarot honors the traditional meaning ascribed to the cards, but emphasizes a more modern, psychological point of view that encourages self-empowerment and creative thinking. Fantasy, myth, and the unseen are part of our everyday lives and those perceptions have a bearing on our understanding of life. When using these cards, we combine both the “real” and the “magical” to better understand ourselves and our world.

The Magical Realism Tarot deck is a 78 card deck and has similar structure to the Tarot of Marseilles, or the Rider-Waite tarot deck.  The Major Arcana and the Court Cards have images of people who represent the archetypes that are used in standard tarot decks. Like the Tarot of Marseilles, the Magical Realism Tarot pips cards are images of the symbols of each suite, rather than scenic illustrations. The Magical Realism Tarot deck was created by Cheryl Fair. Cheryl holds a BA in Visual Arts and is a photographer/filmmaker whose photographs have been published internationally in magazines,newspapers, blogs, and books. Her short experimental films and music videos have been shown in film festivals, and on public television and cable television. Cheryl comes from a family tradition of card divination and began reading Tarot cards at the age of 18. She is also a professional astrologer and has been interpreting natal, transit and relationship charts, for clients for over 25 years.

Many creative people were involved with making the Magical Realism Tarot project into a complete deck. Paula Millet designed the borders and backs of the cards and did the graphic layout. Clarke Bedford made the metal sculpture helmets, the pentacle, and the art car that was used as The Chariot.  Rae Beth Designs made the headpieces  for the Wheel of Fortune card and for all of the Queen cards.   Hollie Chantiles Shortino did the face painting for Death. George Hagegeorge assisted with the photography and proofreading. All of the models are creative people in their own right and include actors, dancers, musicians, tattoo artists, painters, photographers, burlesque performers, actors, comedians and craftspeople.  Most of the models provided their own costuming and put a considerable amount of thought and effort into their role.  These are more than just “pretty faces” , they are creative people who “get it” and collaborated with Cheryl, to create archetypal images.